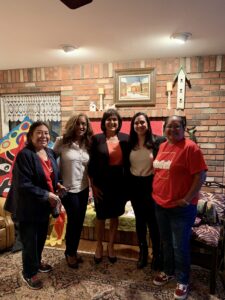 Doreen Garlid becomes the first member of the

“On behalf of the Navajo people, we congratulate and commend Doreen Garlid and her team for their victory in Tuesday’s election. She is a positive example for all of our Navajo people, many of whom reside in the city of Tempe including many Diné students. We are confident that Doreen will serve all citizens of Tempe with great honor and that she will create many positive changes,” said President Nez.

Based on unofficial results of election, Garlid garnered more votes than any other candidate in the municipal race, including the city council incumbents and the mayoral candidates.

Garlid is a longtime resident of Tempe and a married mother of four children, who has committed many years to community service and leadership. In January, she was honored with the City of Tempe’s 2020 MLK Diversity Award for her outstanding and lifelong commitment to elevating Navajo culture and history.

According to her campaign, Garlid and her late mother spent over 45 years offering free community presentations to raise awareness and visibility of Navajo culture. Although her mother passed in 2017, Doreen continues the free community events entitled, “My Mother's Navajo Stories," to honor her mother's memory and to keep the stories of her Navajo heritage alive.

“We are truly proud of Doreen. Her and her team demonstrated what we as Navajo people can accomplish when we dedicate ourselves and work together for the overall betterment of our communities wherever we reside. Congratulations to her and her team!” stated Vice President Lizer.

Garlid thanked her supporters including volunteers, donors, family, and friends for their contributions and commitment to her campaign.

“This victory is because of you. I look forward to the next four years of working in partnership with you and carrying out the vision you elected me to achieve,” said Garlid, whose campaign included giving neighborhoods a voice, making public safety a priority, and advocating for more affordable and workforce housing.

Garlid will begin her term as a member of the Tempe City Council in July.

For the latest news from the Office of the President and Vice President,